We always come back to the issue of security in information technology. For this, we warn against attack models and designing cruel insight into the industry.

But at this point we want to do something different.

Together with WhisperSystems, we are honored to present an app that will mop the debates about data security and the NSA wiretapping scandal. Put back your typewriter, there are other ways of securing the essential communication. We had already developed a platform during the Arab Spring, which ensures secure and anonymous communication. However this portal is not interesting for our current target group as they are not in the scope of mobile usage - such as WhatsApp, SMS & Co.

The RedPhone application presented below is currently only available for Android devices, but other operating systems will follow. This app makes it easy to encrypt the entire communication including all data. The implementation of the encryption is done to the extent that it can be classified as absolutely safe from us. Safer than the "Top Secret" classification of our government - which is not particularly difficult.

The conceptual framework is as subtle as it is security efficiently. The app merges with the software of the mobile device and therefore does not carry weight. There must be no new treatments or processes learned that ensures such operation especially for non-technical Affine. There are still the standard applications used for SMS & phone calls. But if you contact a communication partner, who also supports an encrypted transmission, then your mobile device automatically encrypts the data in the background.

Such a use of encryption software is worthwhile in any case, since the security of, for example, older GSM networks are absolutely ridiculous. Even students can use their home computers or office computers in order to crack the simple encryption. This requires a simple brute force attack which intercepts a message and then compares hashes, for example by trying until it is successful. From this moment it is possible for an attacker to listen to the entire communication. Rather, one is also able to  send and manipulate messages in your name or in the name of your communication partner.

Accordingly, we find that a general usage of such an app is useful, especially when working with sensitive corporate or government data - or simply want to avoid any risks. This software is of course available under the umbrella of open source and is constantly evolving. 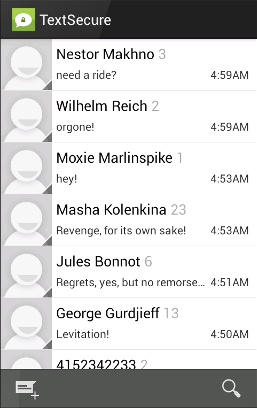 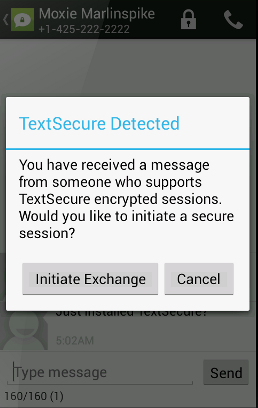 For technical implementation an end-to-end encryption is used. Your message is encrypted on your device and then transmitted via the normal network. Subsequently, the decryption is performed on the side of the communication partner. This end-to-end encryption cryptosystem is based on the AES-128 encryption which is categorized as a hybrid. Here, the key exchange takes place via asymmetric encryption (eg RSA) and the following information is encrypted symmetrical reasons of efficiency. The call is encrypted using SRTP. The key material is negotiated using ZRTP. All communication between RedPhone clients  is encrypted using TLS. RedPhone do not use certificates signed by CAs, however. Instead, it has one’s own "CA certificate" that is distributed with the RedPhone client. Individual RedPhone clients have certificates that are signed by and validated against this "CA certificate," eliminating any requirement to trust CAs. The following is an excerpt from the documentation:

Across the RedPhone architecture, there are three places where data is transmitted, and thus needs to be encrypted:

These messages are encrypted using a very simple protocol:

The AES and MAC keys are chosen by the client and transmitted to the server at registration time. These keys are static, do not provide forward security, and might be better implemented using a counter with keys that roll forward.

The TextSecure encrypted messaging protocol is derivative of OTR Messaging. The major difference being the use of ECC keys instead of standard DSA as well as the compression of some data structure formats.

It is not possible to rely on the multipart message facility provided by the SMS UDH in order to send long messages. It does not work on CDMA networks, so we have to provide for message chaining ourselves. Messages are fragmented using the following format:

The entire TextSecure_Fragment is Base64 encoded, without trailing padding.

When composing a message, the total headerfied, encrypted, and mac'd data message is handed to the transport layer, which then splits the data message into fragments small enough to fit into individual SMS messages. Once the receiving end has received all the fragments, it reassembles them into one message again before verifying the MAC and decrypting.

Some knowledge of the transport layer sizing requirements is needed by the application layer, since it is responsible for padding the message out. What is handed to the transport layer should be sized such that when split into fragments and fully base64 encoded, it will exactly fill the maximum available payload space in each SMS message (140 bits, 160 characters).

In the end, there are 60 characters available in the first fragment, and 115 in each subsequent fragment.

Verifying And Decrypting A Message

A shared secret is generated by doing ECDH using the keys corresponding to the key ids in the message. All of the ECC parameters are chosen from the NSA Suite B specification.

Each client determines whether it is the "low" client or the "high" client by comparing the numerical values of their two public keys.

Starting And Verifying A Session

A session rolls forward just like an OTR session, where only two keys for the sender and recipient are maintained at any time. Keys previous to that are forgotten.

Should clients choose to have "non-ephemeral" conversations, which is to say that the messages they send and receive are stored to disk, they need to be re-encrypted since the original keys used to encrypt them may vanish as the protocol rolls forward.

Clients generate a 128bit AES key and 160bit MAC key at install time, which are hashed and written to disk using PBKDF2.

Locally encrypted messages are then encrypted using AES-CBC$ with HMAC-SHA1 in the encrypt-then-authenticate paradigm. So the format is:

That is basically it.

The source code is freely available on GitHub.

We appreciate your opinions and suggestions and hope you enjoy it. Thanks to the engineering of Moxie Marlinspike and the WhisperSystems Team. :)

I am focusing on Data Architecture and Analytics for Management Consulting across EMEA and the US. For my passion in Data Profiling & Privacy I am doing a PhD research at the Hasso- Plattner- Institute.

More in this category: « Frame Conditions of Fraud Creating proper graphs »
back to top